← Game Design Behind The Fun Of Trick-Or-Treating
What Will Amazon’s New “Lord of the Rings” Television Series Be About? → 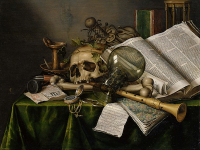 I write a lot about intellectual property protection on Quora because I don’t like the idea of people pirating my games, and recently a Quora user asked me whether copyright laws “kill” art.  Well, he didn’t really ask me.  This was someone who apparently liked posting other people’s music on YouTube and was complaining about how strict he thought copyright laws were.

But answering the question literally, I replied that copyright law does not prevent anyone from creating an original literary, musical or artistic work. What it does is prevent someone else from copying, distributing, recording, or performing that work, or making derivative works, without the creator’s (or his/her assignee’s) permission.

The primary purpose of this is to prevent other people from using someone else’s work – such as their music – without compensating the creator. This is prevented for a limited amount of time after the creator’s death (50–70 years, depending on the laws of individually countries) so that the creator’s heirs can inherit wealth generated by the work. This is no different than allowing someone to pass on physical property (house, land, stock shares, possessions) to one’s heirs.

It also has a secondary purpose of allowing the creator to retain artistic control over sequels, mash-ups and other derivative works. “Appropriation art” is the only type of art that is “killed” by copyright law, and even then, it isn’t doesn’t really kill this art, but rather restricts it.

Someone wishing to make a derivative work can ask the original creator for permission to do so, which usually involves compensating the creator. However, this is no different than an artist needing to purchase materials and equipment needed to make creative works.

The United States and some other countries also recognize the doctrine of Free Use, which allows creators to use another creator’s work without permission for a transformative purpose. This doctrine allowed, for example, The Harvard Lampoon to write Bored of the Rings, a parody of Lord of the Rings, and Andy Warhol to use Campbell Soup cans and photographs of Marilyn Monroe in his own creative works.

As for wanting music for your YouTube videos, if you are too cheap to license it from the person who created it, YouTube offers a whole library of music you can use for free.  They may not be the most popular tunes in the world, but you get what you pay for.

Posted on November 6, 2017, in Games and Society and tagged intellectual property. Bookmark the permalink. Leave a comment.

← Game Design Behind The Fun Of Trick-Or-Treating
What Will Amazon’s New “Lord of the Rings” Television Series Be About? →