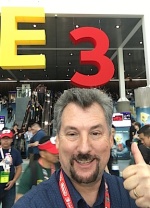 The Electronic Entertainment Expo, commonly referred to as E3, the annual trade show presented by the Entertainment Software Association, made its annual appearance at the Los Angeles Convention Center last week. Once again I set aside a day from work to take the trip downtown to take the pulse of the video game industry and to meet up with colleagues.  I’ve managed to attend and even exhibit at most of the E3’s throughout its 22-year-history, including one time when the expo was held in Atlanta, and I’ve come back with my report for those of you who were unable to go this year.

That’s the question that everyone wants to know, isn’t it?  The winner of 2017 E3, is the game publisher or console manufacturer who had the most effective and exciting press conference.  These press conferences are not part of the expo itself; they are separate events put on by individual game companies.  I would say that that would be UbiSoft, a third-party software publisher which had a more even and confident presentation than did the big three console manufacturers.

Microsoft did have a ton of announcements, but Xbox One X, which should have been the star of the show, seemed of questionable value at its steep price of $500 and too many games that won’t be available until 2018. Sony’s press conference felt too much like old news, playing it safe with few surprise announcements. Nintendo’s was short and sweet, but it was too reliant on the Switch and established franchises, and it did not announce a single original IP.

As far as third-party publishers go, Bethesda didn’t have enough real news to fill up the entire hour, and Electronic Arts presented previously announced titles with no real surprises. 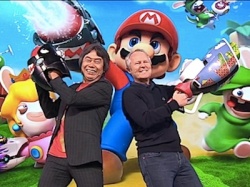 It was a pretty mediocre E3 for press announcements, but given that, I have to hand it to Ubisoft for a strong and diverse presentation, with its established brands (Far Cry 5, The Crew 2 and Assassin’s Creed: Origins) along with ambitious titles (Skull and Bones, Starlink: Battle for Atlas), returning fan favorites (Beyond Good and Evil 2), and a strong commitment to VR. Plus, it opened with a gun-wielding Shigeru Miyamoto promoting Mario + Rabbids: Kingdom Battles. 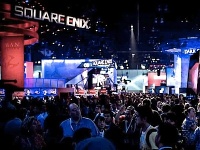 While there wasn’t that much new for me in the press conferences, there was something new in the expo itself, but it wasn’t in what the exhibitors had to show. The biggest change from last year’s E3 was that, for the first time in the tradeshow’a history, the public could attend the entire expo.

Last Year, Activision, Disney Interactive, Electronic Arts, and Wargaming.net had pulled out of the expo, which is aimed at game retailers and press, because games were increasingly being purchased through online sales. In response, the Entertainment Software Association decided to make the show more consumer facing by offering 15,000 tickets for the public.

Activision was the only one of the four to return this year, and it and the other exhibitors found it to be an extremely crowded show, especially on Tuesday, when I’m told there was a lot of confusion and the Convention Center struggled to handle 65,000 attendees, a much higher figure than in recent years, thanks to all the gamers who were permitted to attend for the first time. Fortunately, Wednesday and Thursday were a bit more sane. 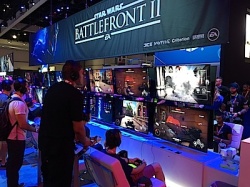 My impression was that the gamers themselves had mixed feelings about the show, thinking that it was like the press conference shows they watched on streaming video, rather than a bunch of exhibit booths that they had to walk among. Many expressed disappointment that they had to stand in line for hours to see demonstrations of their most anxiously awaited games, rather than getting to actually play them. However, there were still some games for the gamers to play, if they stood in line long enough. 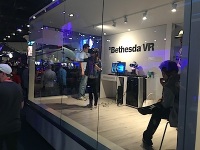 The one trend that grabbed my attention at this year’s E3 was how pervasive virtual reality and augmented reality were.  Over 100 exhibitors had some kind of VR/AR product demonstrate, and all the big publishers were eager to show off that they had VR-ready games in the works, with VR games actually being promoted as games rather than as novelties. But it was also the wide variety of VR technology available. Last year it was mostly the Rift, Gear VR, and Vive on the floor, but this year the PlayStation VR (PSVR) and Daydream were out there as well. There was also brand new hardware innovations to be seen at the show. 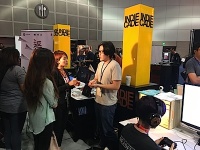 Almost every time I attend E3, I feel like I’m seeing the same things I saw last year — at least from the AAA world, which is very risk-adverse and relies on the predictable sales of sequels, remakes and franchises. So, while it’s the console manufacturers and AAA publishers who get most of the press, I am drawn to the IndieCade booth when looking for something new and different. 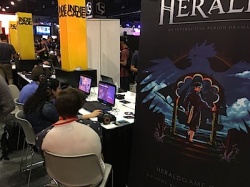 The first game that caught my eye was Herald: An Interactive Period Drama, a point-and-click adventure and visual novel taking place in the eastern colonies of a fictional colonial empire in the 19th century, a time of widespread inequality and injustice. While the technology is not new, what I liked about it was that it has a strong message concerning our modern-day social interactions. By making difficult moral choices that alter the course of the storyline, Herald sets out to make players feel the sting of oppression and the weight of living in a society divided by race, class and culture. Find out more at http://heraldgame.com/ 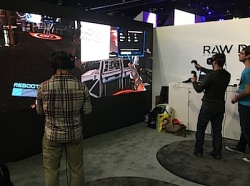 Of course, virtual reality was very evident at the IndieCade booth, and one of the many VR games on display was Raw Data. This games immerses you through its action combat mechanics, sci-fi atmosphere, intuitive controls, and darkly humorous narrative. Active VR gameplay turns you into a controller, with instant reflex access to an arsenal of advanced weapons and cutting-edge nanotech powers. Shared spaces with avatars and motion tracking encourage players to communicate through body language and environment interaction You can either go solo—or team up with a friend to become the adrenaline-charged heroes of your own futuristic technothriller. Find out more at https://survios.com/rawdata/ 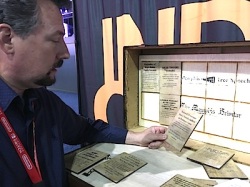 My favorite game on display at E3 was not a video game an educational alternate reality game (ARG) called Tracking Ida, inspired by the pioneering investigative journalism of Ida B. Wells in the 1890s. Players explore a trunk sent by Wells. The trunk contains the salvaged evidence of Wells’ investigation into Memphis lynchings–what she managed to preserve after her newspaper office was burned down by a lynch mob in 1892. To keep these documents out of her persecutors’ hands, Wells secured them in locked compartments. Players solve puzzles to unlock each compartment in the trunk as they search for the map to her investigative tactics. I enjoyed the game for its physical immersion, puzzle solving, historical context, and social message. The game’s developers hope to place it in schools and libraries, and you can find out more at http://trackingida.com/ 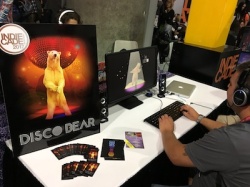 I would be remiss if I didn’t mention Disco Bear, created by my friends Brian Handy and Katie Pustolski, both of whom are students in the USC Games Program. Their game tells the heartfelt story of a bear being asked to dance again. Across this short, ten minute long “meme-like” experience, you play the role of Bear, an expert dancer, as shenanigans unfold around him. Will Disco Bear dance again? Can Tiny Bear save the roller rink? Find out all this and more at http://discobeargame.com/. 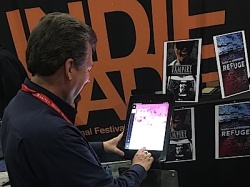 Now, there was one franchise-driven game that I could sink my teeth into at E3.  Having produced Vampire: The Masquerade – Bloodlines when I was at Activision, I was thrilled to stumble upon, .”We eat Blood and All our Friends are Dead, a short (3-4 hours) interactive horror novel set in the Vampire: The Masquerade universe and played in a seamless mobile messenger format.  The game is a classic “choose-your-own-adventure” with hidden tracked character variables and items, but it is also a personal and artist-driven experience by award-winning author/artists Zak Sabbath and Sarah Horrocks.  You can find out more at https://blog.white-wolf.com/2017/02/16/prelude-to-a-world-of-darkness/.

And that about covers it for E3 2017.  As I said, it was a mediocre show, and it remains to be seen whether allowing the public to participate will breath new life to it, force it to radically change into more of a consumer show instead of the hybrid it was this year, or be the nail in its coffin.  One thing that seems clear is that if the show does continue, it may need to find a new location that can accommodate so many attendees. 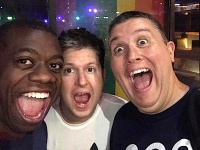 The Electronic Gaming Expo, or E3, officially begins on Tuesday, at the Los Angeles Convention Center but it unofficially begins a few days earlier. The console manufacturers and large game publishers hold press events to take advantage of the timing, and many groups, both large and small, hold networking get-togethers in various venues near the Convention Center. In fact, one of my most important tasks in preparing for E3 is in deciding which of the networking events I will attend.

I just returned from my first E3 event of the year, the 9th Annual GGP at E3, held at the Redline Food & Bar in Downtown LA. “GGP” stands for “Gay Game industry Professionals”, an informal group originally formed by Brian Ruben, Vice President of in an ad-hoc attempt to gather gay, lesbian, bisexual and transgender folk attending E3 that year to go out one night together. It then turned into a mailing list and then into a Facebook Group, now comprised of over 1000 members, that serves as a professional resource for hiring game industry professionals, finding a vendor or partner company, or looking for a job.

I was invited to tonight’s gathering by Gordon Bellamy, a Harvard-educated game video game executive who served as the Executive Director of the International Game Developers Association from 2010 to 2012, and is an exuberant advocate for diversity and inclusion. It was a very well-attended and lively event, with many of my fellow straight industry colleagues in attendance as well.

Why would someone who is straight attend a LGBT professional get-together at a gay bar? Well, according to the 2014 Developer Satisfaction Study conducted by the IGDA, 79% of us think that diversity is important for the game industry, and 74% of us think that it is important at work, but only 28% of us think there actually is equal treatment for all. So, it is essential that we support all of our fellow game professionals in uniting around our common love of games.

It is vital to have a game industry that is as inclusive as the gamers for whom we develop games. More and more gamers are coming to understand and accept the value of diversity as well, and with this year’s E3 being the first that is open to the public, I can’t think of a more appropriate event to kick off E3 than this.