Commemorating SpaceWar! And Its Pioneering Developers 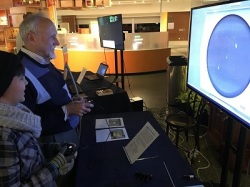 My manager at a game publishing company I worked at years ago came out of the film industry, and as I was discussing some of the early videogames that had influenced me, he interrupted me to say that he had no idea that gamers had such a sense of history.  Just as film buffs love classic movies, many of us gamers love so-called retrogames.  We are drawn to them not just out of nostalgia for different eras, but also out of appreciation for their originality, inventiveness, and elegant simplicity.  Also, those of us who know our game history realize that game developers reach the heights that they do only because they are, to use a well-worn but appropriate phrase, standing on the shoulders of giants.

And so last week I was thrilled to be invited to attend Innovative Lives: The Pioneers of Spacewar!, an event honoring the developers of a 1962 video game that helped launch our industry, hosted by the Lemelson Center for the Study of Invention and Innovation at the Smithsonian National Museum of American History in Washington. DC.  The event brought together, for the very first time in sixty years, seven of the game’s remaining developers — Dan Edwards, Martin (“Shag”) Graetz, Steven Piner, Steve (“Slug”) Russell, Peter Samson, Robert Saunders and Wayne Wiitanen — to discuss the development of their influential video game.

During a cocktail reception before the panel discussion, Lemelson Center director Arthur Daemmrich explained to me how fortunate it was that many of the pioneers of the video game industry were still alive to be interviewed and have their memories and insights recorded for posterity, and that was part of the impetus for hosting this event.  Such first-hand recollections allow us to understand the personalities, technologies and social forces that came together to make interactive entertainment one of the most successful industries of all time.

When it was time for the honorees take the stage, I was pleasantly surprised how energetic and enthusiastic these seven octogenarians were.  During the panel, moderated by Bethesda founder Christopher Weaver, they recalled how, in 1961, they were all either students or employees at the Massachusetts Institute of Technology, Digital Equipment Corporation (DEC) had donated PDP-1 minicomputer for educational purposes to complement the older TX-0 in MIT Electrical Engineering Department. Even before it arrived, they began brainstorming ideas for programs that would demonstrate the new computer’s capabilities in a compelling way.

It was Russell, Graetz, and Wiitanen who came up with the idea for Spacewar!  They wanted to show off the PDP-1’s display capabilities and thought that making a two-dimensional maneuvering program would be a good approach, and being science fiction enthusiasts, decided that the obvious thing to do was spaceships.  Professor Jack Dennis, who was responsible for the PDP-1, thought this was a great educational opportunity for the students.  In exchange for giving them time to make their game, he asked them to port the TX-O’s operating system to the PDP-1 over a 3-day weekend. His only other requirement was that they not break the computer.

Fortunately, they found the PDP-1 easy to program. Also, two of the students were members of the Tech Model Railroad Club and their knowledge of track relays and circuits helped them to devise the game’s logic. They decided to have the gameplay involve two monochrome spaceships< called "the needle" and "the wedge", attempting to shoot torpedoes at one another while maneuvering on a two-dimensional plane in the gravity well of a star, The ships followed Newtonian physics, remaining in motion even when the player is not accelerating, though the ships can rotate at a constant rate without inertia. The sun in the center of the screen was created as an element the player couldn't control; it helped make SpaceWar! a game of skill.

To make Spacewar! easier for beginning players who founded themselves surrounded by torpedoes, the team added a hyperspace jump feature that players could use to vanish from tough situations, but to keep the feature from being abused, they had the ship reappear at a random position — possibly even a more dangerous one. They also balanced the skill of skilled players by limiting the amount of fuel and torpedoes available to them.

Because of the PDP-1’s limited processing power, the team found that the computer could not have every game element obey real-world physics and update the screen at an acceptable rate. So they decided that the torpedoes fired by the ships would not be affected by the gravitational pull of the star (they were “photon torpedoes”, one of the panelists jokingly explained). However, the team did allow for the game’s starfield to be based on a real star chart, with the star positions modified based on the seasons.

Spacewar! did not work immediately because Russell was “lazy” and didn’t want to write a sine and cosine function for the game. The team eventually got functions from someone else, and Russell emulated these for the game to make it work correctly. The final game worked so well that DEC used it to test its other computers to ensure they were operating at proper performance rates.

Spacewar! was extremely popular in the university programming community in the 1960s. The MIT team made the game public, and other students recreated it on the minicomputer and mainframe computers of the time. Computer scientist Alan Kay noted that “the game of Spacewar! blossoms spontaneously wherever there is a graphics display connected to a computer.” By 1972 the game was well-known enough in the programming community that Rolling Stone sponsored the “Intergalactic Spacewar! Olympics.”

In the early 1970s, Spacewar! migrated from large computer systems to a commercial setting as it formed the basis for the first two coin-operated video games. Some of the games that were influenced by Spacewar! include Computer Space, developed by Nolan Bushnell and Ted Dabney, which would become the first commercially sold arcade video game and the first widely available video game of any kind, as well as Orbitwar (1974), Space Wars (1977), Space War (1978) and Asteroids (1979).

It should come as no surprise that at the conclusion of the panel, Academy of Interactive Arts & Sciences president Meggan Scavio presented these developers with the organization’s Pioneer Award, honoring individuals whose career-spanning work has helped shape and define the interactive entertainment industry through the creation of a technological approach or the introduction of a new genre. As the Spacewar! creators became the AIAS’ ninth through fifteenth Pioneer Award recipients, we in the audience — which included such other video game pioneers as Ultima creator Richard Garriott, Deus Ex creator Warren Spector, Zork creator Dave Lebling, and Defender creator Eugene Jarvis — gave them a rousing standing ovation, for the game industry would probably not be what it is today without their contributions.

A user of the question-and-answer site Quora recently asked me how the game publisher Electronic Arts its start. Although I’ve never worked directly for Electronic Arts, I was co-owner of a company, Electric Transit, that was Electronic Arts’ first affiliated label publisher, and I did work for EA founder Trip Hawkins later as one of his employees at The 3DO Company. So, I figured that gave me enough expertise to answer the question, and here is the answer I gave.

Electronic Arts founder Trip Hawkins got the idea to start a company publishing computer games while he was a student at Stanford University in 1977. He told his idea to like-minded fellow Stanford student Bing Gordon but estimated that the home computer market wouldn’t be large enough to make such a company viable for another five years.

Sure enough, in February 1982, Trip Hawkins arranged a meeting with Don Valentine of Sequoia Capital to discuss financing his new venture, which he called Amazing Software. Valentine encouraged Hawkins to leave his position as Director of Marketing & Strategy at Apple Computer and allowed Hawkins use of Sequoia Capital’s spare office space to start the company.

On May 28, Trip Hawkins incorporated and established the company with a personal investment of an estimated $200,000. Seven months later in December, Hawkins secured $2 million of venture capital from Sequoia Capital, Kleiner Perkins Caufield & Byers, and Sevin Rosen Funds.

For more than seven months, Hawkins refined his business plan. With aid from his first employee (with whom he worked in marketing at Apple), Rich Melmon, the original plan was written, mostly by Hawkins, on an Apple II in Sequoia Capital’s office in August 1982. During that time, Hawkins also employed two of his former staff from Apple, Dave Evans and Pat Marriott, as producers, and a Stanford MBA classmate, Jeff Burton from Atari for international business development. The business plan was again refined in September and reissued on October 8, 1982

Between September and November, employee headcount rose to 11, including Tim Mott, David Maynard, Steve Hayes, and his friend from Stanford, Bing Gordon, whom he brought on as Chief Creative Officer

Having outgrown the office space provided by Sequoia Capital, the company relocated to a San Mateo office that overlooked the San Francisco Airport landing path. Headcount rose rapidly in 1983, including employees from Apple, Atari, Xerox PARC, and VisiCorp, and Hawkins got Apple’s Steve Wozniak to agree to sit on the board of directors.

After deciding that “Amazing Software” was too pretentious a name for the company, the employees held a meeting that lasted late into the night to come up with a new name, and they selected “Electronic Arts.”

Hawkins wanted to treat software as an art form and called his developers, “software artists.” He decided to model his publishing company after the music publishing industry, and so contracted music producers to instruct his game producers — including Don Daglow, Richard Hilleman, Stewart Bonn, David Gardner, and Nancy Fong — in how to recruit, work with, and promote talent. Electronic Arts game its game developers in its marketing and packaging materials, and modeled its packaging after album covers because Hawkins thought that a record album style would both save costs and convey an artistic feeling.

Years later, as I was driving him to the airport when we were both at The 3DO Company, Hawkins told me about how he was the inventor of the term “producer” for the liaison between a game publisher and a game studio, as well as the term “director” for the person who directly manages the development team. And as much as he promoted the concept of game developers as artists, he told me that every game ever made originated from one of his ideas. I don’t know if he was kidding me or not, but true story!

Electronic Arts, or “EA” as the company was also known, quickly became the biggest game publisher, and has maintained it dominance in the industry for 35 years, even after the departure of Hawkins in 1991 to head up The 3DO Company, as well as Bing Gordon and many of its original executive and producers. As many success stories as there have been in Silicon Valley, Trip Hawkins’ original success with Electronic Arts has to rank as among the greatest.