← Still Gaming After All These Years
Electrifying Education Through Gamification: Part 1 – The Challenge → 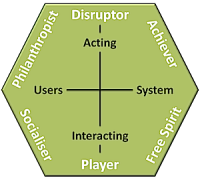 On Saturday evening I taught a session of my introductory game production class at the Los Angeles Film School. I don’t normally teach on Saturdays, but we postponed a Tuesday night class to the weekend because that night I had been invited to give a lecture about Gamification and Learning to an Educational Technology class art Loyola Marymount University. So, this was one of those times when work spilled over into the weekend.

My Saturday lecture was about the human motivations that game designers tap into to make games engaging, and how designers should first determine what motivations they want the player experience to satisfy and then select devise the game mechanics that will create that play experience. (Novice game designers will often start planning a game based around game mechanics without consideration to the player experience, and that can lead to an unsatisfactory play aesthetic.)

For the lab following the lecture, I decided to have my LA Film School students do a gamification exercise similar to what I did for the LMU class earlier in the week. Not only did I think the exercise would be an good way to focus on the link between player motivations and game mechanics without the distraction of other game elements, but it gave me an excuse to use Andrzej Marczewski’s Gamification Inspiration Cards again.

I had my eight students that night break up into two teams of four, and each had to create a gamified system for solving one of several business problems I offered to them. Team One chose the task of training security guards to protect a building, and Team One selected the task of improving membership at a Health Club. 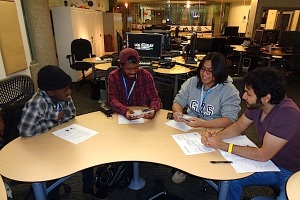 My student’s next step was to create a three-stage “User Journey” for their system’s uses. Team One decided to have their security guards get started by entering into a training session; once guards were able to attain an 80% score on a Standard Operating Procedure test, they would then be assigned to the lobby station, where they had to check the ID’s of people entering the building; and if the guards were able to catch three “ringers” who had false ID’s, the guards were promoted to making security rounds throughout the building.

Team One elected to pursue Players, who are motivated by rewards. This is the gamified system they devised: 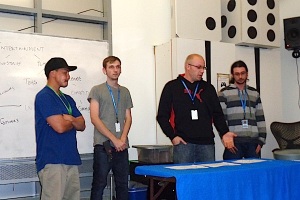 Team Two created a User Journey in which health club members were on-onboarded by filling out a membership form; they then developed the habit of visiting the health club through incentives for using the basic equipment; and when they achieved mastery, they were able to use the advanced equipment.

Team Two elected to pursue Achievers, who are motivated by Mastery. Achievers are looking to learn new things and improve themselves; they want challenges to overcome. Here is the gamified system they devised:

Team One elected to have a single spokesman to “pitch” their gamification proposal to me, whereas Team One presented their proposal as a team effort. However, both did an excellent job and earned a full 100% grade for the assignment, and I think they learned about the importance of finding the right game mechanics to motivate different types of players.

What impresses me most about this assignment is that even though they are Game Production (and not Business or Marketing) students, my students always seem to enjoy gamifying a business problem. But perhaps I shouldn’t be surprised. After all, gamification is all about finding the fun in a non-game activity.

← Still Gaming After All These Years
Electrifying Education Through Gamification: Part 1 – The Challenge →