A Letter to Owen, Part 6 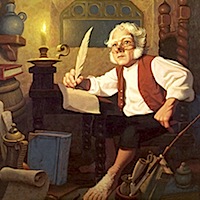 A woman contacted me on Facebook to tell me that she of a gift she was preparing for her grandson’s Bar Mitzvah. The boy is a very avid gamer, and she wanted to present him with a book of letters written by people who worked in the game industry. She asked me to make a contribution, and here is more of what I wrote.

Once again, I was out of work, but not for long. My designer on Heroes III told me that Activision was looking for a producer to work on their next Star Trek game. and a month later, I was working for Activision. Twenty years after making that Star Trek game in college, I was finally going to work on a real Star Trek game!

By the way, have you noticed a theme here? Almost everything job I’ve gotten in the game industry was through someone I already knew. The game industry is relatively small but very competitive. It’s important that you make yourself known – by attending trade shows and conferences and meeting people, by using social networking like Facebook, LinkedIn, and Twitter – because for every open job position there are hundreds and hundreds of applicants. The people who get the jobs are the ones who already know someone in the company.

Anyway, I was finally working on a Star Trek game! But once again, there was a problem. Star Trek: Nemesis had just bombed in the movie theaters, and Star Trek: Enterprise was tanking in the television ratings. So Activision decided to stop making Star Trek games six months into my project.

I got transferred over to another game that had been languishing for 18 months because it didn’t have an Activision producer overseeing it. It was Vampire: The Masquerade – Bloodlines, a horror role-playing game. That was a pretty cool game, but the game developer needed a lot of baby-sitting because they had a hard time making decisions and finishing work up. I had to visit their office every day to keep an eye on them. What was bad about that is that their office was 80 miles from where I lived, and some mornings the traffic was so bad it would take me 3 hours to drive there.

Often to make tight deadlines, you have to work what’s called crunch time – extra long hours. After a while we were working 6 and then 7 days a week, often past midnight. I got very little sleep the last three months we worked on the game, but we did finish it, and it got pretty good reviews. Unfortunately, it was buggy. That’s because the game had taken so long to make, Activision didn’t want us to spend the time that was needed to fix the last bugs. So, the game didn’t sell as well as we hoped. But I’m still pretty proud of it.

That was one of the last games for personal computers that Activision made. I was working in the department that produced pc games, and when my three-year contract was up, Activision didn’t renew it. Most of my experience was in computer games, and most companies won’t let you work on console games if you don’t already have console game experience.

I wound up working for someone who had worked in the mailroom at Cyberdreams and went on to form his own company. He was making mobile phone games, and I became his development director. We produced a lot of sports game for the Winter Olympics, and then went on to make golf and poker games. After three years I went to work for the Spin Master toy company, making children’s MMO’s and websites. Then I became a consultant, doing game design and production on small projects.

I still do that, but I’m also interested in helping young people learn about game development. I was part of the team that created the Boy Scouts new game design merit badge, and I also teach game production at The Los Angeles Film School.

So, what advice do I have for young people getting into the game industry? It’s a fun job, but it’s also a touch one. You need to be very good at your job – whether it’s game design, programming, art, audio, or production. You need to always be doing your very best work while being mindful of your project’s deadlines.

Most games are made by teams, and so you need to be a good team player. Communication skills are also very important – both written and verbal skills. You need to communicate well with your fellow team members, with your manager, with your publisher (if you are working for a developer), and with the customer – because the game itself is a form of communication.

Most of all, you must be passionate about what you are doing. Game development really is a calling. It’s a real roller-coaster ride, with lots of ups and downs, and you have to love your work to deal with all the stress, long hours, and frequent disappointments. But you know what? I can’t imagine doing anything else! At the end of the day, I love making games!

So, if you love games, too, then follow your dreams and have a go at it. If you have any specific questions about the game industry, I’d be glad to try to answer them.

Posted on February 10, 2014, in Career Advice, My Career. Bookmark the permalink. Leave a comment.