L.A. Game Night At The Scum And Villainy Cantina

You know how you never see the tourist spots and landmarks in your own home town? Such was the case with me and the Scum and Villainy Cantina, a Star Wars themed bar located on Hollywood Blvd in the heart of Hollywood. Although I work only two blocks from this “friendly, neighborhood geek bar” where comic book fan and filmmaker Kevin Smith hosts the weekly podcast Fatman Beyond with his cohort Marc Bernardin, I never seemed to find the time and energy to stroll over to this otherworldly watering hole to check it out. Until last night, that is.

I came at the invitation of Redd Yoachum, the owner of the Los Angeles based music production company Redd Rock Music. I had met Redd the previous week when we were both on a game industry panel at the Art Institute of Hollywood. Redd is a passionate gamer, and coming from the music industry, he was enthusiastic about the idea of promoting indie game developers in the same way that indie bands were promoted. So, he started going to game development meet-ups around the Los Angeles area and invited them to show off their games at a monthly event, L.A. Game Night, that he holds on the last Sunday of the month at the Scum and Villainy Cantina, which is owned and operated by Redd’s long-time friend J.C. Reifenberg, a filmmaker who turned his love for Star Wars into a gathering spot for all fans of fantasy and science fiction.

The evening I attended was the fifth meeting of L.A. Game Night, and the venue did not disappoint. In one small step, I made the giant leap from modern-day Hollywood Blvd to a cantina from a long time ago in a galaxy far, far away. After passing by the droid detector, I found myself in the middle of a Mos Eisley cantina, where alien concoctions were bubbling behind the bar and I expected intergalactic smugglers and bounty hunters to be having secret discussions in the dark alcoves along the wall.

However, I was here for the games, and again, the event did not disappoint. Here is a rundown of some of the indie games I sampled.

LIttle Bug is bittersweet adventure platformer from Buddy Systems Games in which I coordinated two playable characters who share a physics based swinging mechanic in real-time. I played both as Nyah, a little girl who walking home from school when she’s suddenly cast into an uncanny world where dangerous spirits linger restlessly in bottomless canyons and moonlit desert, or her spirit light. While Nyah can walk on the ground and collect treasures, her light can fly in any direction — and I could them both in tandem at the same time. By forming a telekinetic beam between them, I created a powerful connection that can swing Nyah to new heights, destroy barriers, thwart spirits and light the way to secret locations. I especially enjoyed the foreboding, atmospheric landscape. You can find out more about this game on Little Bug on Steam.

Reiko’s Fragments is Pixel Canvas Studios’ fully immersive VR experience in which I donned a Vive headset to explore the harrowing hallways and daunting rooms of a creepy house inhabited with puzzles and clues while evading the terror of those who inhabit the house with you. I used the handheld controller to collect the fragments of your lost memory to discover the truth behind the identities and story of the doll, ghost, and your own self. I was impressed with the number of items with which I could interact and engrossed by the story about the tragedy of what happens when the pieces of a family become fragmented, of the freedom we have to make choices, and of the consequences we cannot be freed from. Some of the jump scares were especially… scary. Joey Lee, the game director and studio founder, told me afterwards that what I played was just a tiny vertical slice of the game. The full game, which uses the Unreal engine and is displayed at a rate of 120 fps, is a full two hours long. You can find out more at Rei-ko’s Fragments. 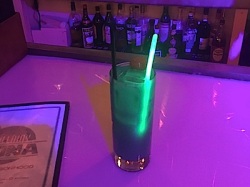 After such a harrowing experience, I needed some libations to calm my nerves. I sidled up to the bar and scanned the drink menu: Asteroid Field, The Mind Trick, Grabthar’s Hammer, as well as food items like the Falcon Burger. I couldn’t decide and so I asked the barkeep to name the most Star Warsy drink on the menu, and she recommended I try the “Wretched Blue Milk” a concoction made with rum, coco lopez, blue curacao, and pineapple juice, and served with a green glowstick. It tasted like a pina colada, which was 12 parsecs from wretched to my tastes.

Throughout the evening, Redd and his crew interviewed the indie developers for a video live stream (available at www.twitch.tv/la_gamenight) and that he films a live-streamed podcast at 5pm, one hour before the event itself, which runs from 6pm to 11pm. If you are someone who loves video games and wants to check out the latest on what indie game makers in the LA area are developing — or even if you just want to play a classic retro console games with someone cosplaying a Wookiee while you are sipping a “Bad Feeling About This”, come on down to this wretched hive of Scum and Villainy on the last Sunday of the month. You can find out more at LA Game Night | Patreon.

Posted on October 1, 2018, in Game Industry and tagged indie development. Bookmark the permalink. Leave a comment.