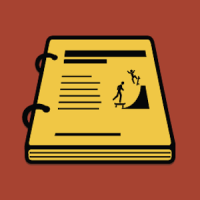 When I first started teaching game design, I searched the internet for templates my students could use for writing their own Game Design Documents, but I was disappointed that every template I found was essentially a table of contents for a GDD and not a guideline for what to write for its content. So I eventually decided to create my own template, based on what I taught my students about game mechanics and system design, and I think it has been very successful in getting my students to understand how all the elements should work together.

And so, without further adieu, here is is the template I created for to them.

This page simply contains the elevator pitch and overview information you created for your concept’s green light presentation.

Example: Somehow it always falls to Mustachio to rally his friends for their many adventures. Run and jump through a side-scrolling world made of and inhabited by blocks. With mustaches. A world full of action, puzzles and arbitrary danger that Mustachio faces boldly with his mustache-fueled power to make block duplicates of himself. What? Cloning AND mustaches?! You betcha.

High Concept: A one-sentence summary of the game’s premise.
Game Genre: First person shooter, platformer, role-playing game, real-time strategy game, etc.
Setting: Medieval fantasy world, modern day city, etc.
Target Player: Interests, age, gender, casual vs. hardcore, etc.
Play Value: What will make the game fun to play? Be specific and think in terms of the player experience rather than game features. Is it reality-based or fantasy-based? Is it predictable or full of surprises? Is it immersive? Is it a mindless pastime or challenging? Are there few or many rules? Do you build or destroy things? Do you cooperate with other players or is it a competition? Is it funny, scary, suspenseful, tranquil, cheerful or gloomy? Is there a risk of losing progress, lives or the entire game?
Competition: What game(s) have a similar setting, genre, and/or mechanics.
What’s Unique: What makes your game different from similar games?
Game Engine: Game Maker, Unity, Unreal?

You may write this in paragraph form or as a step-by-step list.

Joe sits down at his computer ready to play a game he saw on Kongregate and decided to try on a whim. Seeing the logo on the title screen he sees what appears to be D.I.B.B.s front and center wielding his batons with two figures standing behind them both with cheesy grins on their faces who he assumes are probably Factman and Noggin. Behind all three of them stands an ominous figure surrounded by robots and from that he presumes (and presumes correctly that this is the primary antagonist of the game). From this logo he can infer that this game is a bit cartoony and probably comical at times, but he is also taken aback by the use of rock music in the theme song, but slowly starts bouncing his head as he gets used to it.

The first thing that he sees is a short cut scene detailing the past and how that has led to the present. Joe sees the almost comic book style of this scene and laughs at the jokes that he sees and before he knows it he see DIBBs at stage 1 of the very first level…Ready to go Joe is relieved that this level is a tutorial as he sees a series of on-screen text boxes detailing the world he is now and how he should interact with it and thus he can actually practice the controls scheme that he saw in the earlier screen.

What he sees now though is a scene reminiscent of a laboratory with white walls and equipment making up the background; DIBBs, the obstacles and the enemies he has to face in the middle ground; and wires and slender beams making up the foreground all of which give this game an artistic depth. As he looks he is also hearing the intro to the music that will accompany him at this stage of the game. The music while in the sound that deviates from the standard Pop that goes along with cartoons these days gives him the sense that he is actually going on a journey.

The first thing Joe does is actually practice through a step by step prompting of these text boxes with the melee and ranged aspects of his weapon on the enemy Robots that are on the screen. He then is introduced to the Med Packs and Blaster Packs which replenish both his health and blaster energy, respectively, and he also realizes that he needs to keep an eye on both resources.

From this point Joe moves on to a room with a fairly large pit with a hook on the ceiling. At this point he learns about the whip function of the batons through yet another set of step by step instructions, as a means to traverse around the space and proceeds to use that whip function to cross the pit worried that he may not make it, but thankfully on his first attempt does.

But that is only the beginning….

Assemble an image and link for 3 DIFFERENT GAMES that have inspired your game concept. (Other media are acceptable as well, but make sure there are at least 3 games before adding non-game media)

Include for each game:

Describe what is the player trying to accomplish (e.g., solve a quest, clear a level of enemies, escape from a monster, get a high score).

List all of the steps required to set up the game before players actually start playing (e.g., level generation, enemy placement, resource allocation).

List the general steps that the game or players must perform to progress the game from start to end. In other words, list the rules for your game as though it were instructions for a board game.

List the different ways the game can be brought to a close through winning, losing and/or a draw.

List each of the mechanics the player can perform in your game (move, maneuver, jump, combat, aim, shoot, collect, buy, build, destroy, etc.)

For each mechanic describe:

For each resource describe:

What are the systems in your game that determine what actions players can perform, how resources are produced and consumed, and how game objects behave?

For each system, describe:

Draw a system diagram, showing how the systems are connected by what resources are consumed and produced by each system.

Create a UI Flowchart consisting of all the screens in your game and how they flow from one to another. Past this chart at the top of this page.

Paste in wireframes for each of your game screens, such as:

Label all elements of your wireframes so the reader understands what each button, icon and indicator is.

If your game has a traditional narrative, describe it below.

Describe the flow of the narrative in your game (as appropriate). If things happen out of sequence, describe the overall sequences.

Backstory
What happened before your game begins. Why is the protagonist and/or antagonist here at the start of the game?

Complication
Describe the protagonist(s) and his/her problem to solve over the course of the game. What is the overall goal of the game?

Body
Describe the challenges and obstacles the player encounters toward the end game. (This will likely be the longest part of your story, since it describes the vast majority of what the player experiences while playing the game.)

Climax
Describe the big boss battle or the greatest challenge in the end game.

Denouement
Describe what happens after the player resolves the final challenge.

Describe the look and feel of the setting.

For each level in your game:

If your game has fewer than 3 levels, or is not a level-based game, please explain why.

If you use this template for designing your own game, let me know what did or didn’t work for you.  I’m especially interested in knowing whether this format helped you to figure out the mechanics, objects, and systems of your game.