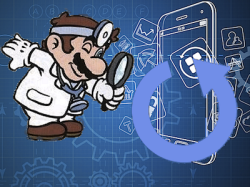 In this series of articles, I am taking a look at how innovators and entrepreneur developing non-game apps and other products through the application of Amy Jo Kim’s Game Thinking process can analyze their work using some of the factors that game designers use to determine that the games they are developing are delivering the desired player experience. Last week I discussed how to analyze an app in terms of its Depth. This week I will focus on its Replayability.

Replayability: The ability to find enjoyment in a game after playing it multiple times.

If you played a game only once and had no desire to return to it again, either it took a very long time to play through to the end (such as with an online role-playing game that can take weeks or months to play), or it just wasn’t fun enough the first time through.  Game designers want their games to be so fun that players play a second time, a third time, a fourth time, and if the game is sufficiently deep, a hundredth time.

In Game Thinking terms, we want apps to be sufficiently experiences that users will want to return to the activity loop during the Habit-Building Phase of the Player Journey so that Newbies become Regulars.  In non-game apps, replayability can be referred to engagement,

Engagement is often measured by how frequently users actually use an app and is defined by the average number of sessions per Daily Active User. Every time any user, not just a unique user, opens your app, that counts as a session.  If a user is very engaged in your app, they will open your app several times a day.

The essence of an app being engaging is that users find value in it; that is, it actually does satisfy the users wants and needs.  But beyond that, there are a number of tips we can take from the world of game design about how we can make non-game apps more engaging:

In summary, you need to design your app so that your users get value from it quickly, feel good about developing the skill to achieve that value, and can have additional content, information, features and uses to keep them coming back for more.  Of course, there is the danger of turning off some users by providing them with too much information to absorb or too many decisions to make quickly, and so, for the next and final installment in this series, we will look at the factor pace.

Posted on May 8, 2017, in Game Design and tagged game design, game thinking. Bookmark the permalink. 1 Comment.