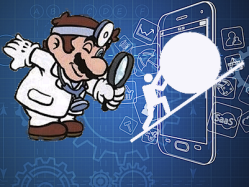 Two weeks ago I had the great pleasure and privilege of participating as a coach at Amy Jo Kim’s Game Thinking Live event, a two-day training seminar introducing innovators and entrepreneurs to principles of game design that can be applied to the development of their own non-game products to make them more engaging. As I went over the training materials in preparation for my coaching responsibilities, I thought about what I teach my own game design students at The Los Angeles Film School, and one additional thing that I thought might be helpful to innovators was to show them how I teach my students to analyze the games that they are developing to ensure that they are delivering the intended user experience.

Five factors that I cover on in analyzing games are difficulty, complexity, depth, pacing, and replayability, and in post I will focus on…

Difficulty: The amount of skill a player needs to overcome the game’s challenges.

For challenges in games to be engaging for players, they need to have the right level of difficulty. When players play a game for the first time, their skill level for playing that game is low, but it will likely improve as they continue playing a game. However, if the game’s challenges exceed the abilities of the players’ current skill level, it can lead to frustration. Conversely, if players’ skill level is increasing faster than the challenge, it leads to boredom. The results of both of these situations is the same: players will leave the game.

Yet if the difficulty of a games’ challenges increases at the same rate as the player’s skill levels, it can keep the player engaged in the game. This balance of difficulty is an important factor in keeping the player in a state of flow: the mental state in which a person performing an activity is fully immersed in a feeling of energized focus, full involvement, and enjoyment in the process of the activity. When players experience flow, time stops, nothing else matters and when they finally come out of it, they have no concept of how long they have been playing.

So, what does this have to do with creating an app that isn’t a game? Well, a project that is created using Game Thinking begins with implementing its core learning loop. This is the basic level of engagement in your app. It is comprised of the following elements:

Take a look at the second element.  Feedback that drives learning and skill-building.  When you play a game, you gain skills and knowledge that prepares you to take on greater challenges.  The same is true with using an app.  As you use an app, the skills and knowledge you gain transforms you as you engage with the product experience, allowing you to gain more value from the app.  Setting your app’s difficulty properly helps to ensure that there is a smooth learning curve for the user to advance from Onboarding to Habit-Building  and increases the likelihood that they will continue on in the Player Journey to Mastery.

If you are to transform your players, must properly adjust the difficulty of using the app to the user’s skill level.  How do you know what the appropriate skill level is for your users?  Simple: ask them during playtesting, “On a scale from 1 to 5, with 1 being very easy and 5 being very difficult, how difficult was it to use this app?”  You can also ask playtesters how empowered they felt using the app or whether the app did what they wanted it to do, since negative responses to either question might be a result of the app being too difficult for them to use.

Unlike games, most apps can never be too easy to use.  But what should you do if your playtesters tell you that your app is too difficult?

One potential solution might be to provide more information about how to perform the various actions in your app or even about what the purpose is of some of your app’s features. Information can be given through help screens, tutorials, tips or even by encouraging your users to discover on their own through experimentation about how features work.

Another potential solution to try is to give users more of whatever resources they need to perform the app’s actions — whether that resource be time, points, virtual currency, or data.

When users report that they need more time to perform your apps actions and there aren’t any direct time limits implemented in your app for you to adjust, such as the delayed effect of performing an action due to your app’s performance speed, it may be that any aiming mechanisms (whether be how your users aim a camera for taking a photograph or aiming their fingers for touching the correct user interface location) needs to be re-evaluated.  Or if the user needs to perform a combination of key-presses to perform at time-sensitive action, you may need to find a way to revised the user interface to make fewer key-presses necessary or not require the user to be as dexterous when using multiple or complex control mechanisms. Users may even report that they don’t have enough time to perform actions simply because there isn’t an effective indicator that tells them they are ready to perform that action.

If your app allows users to perform certain actions until they’ve accumulated enough points or currency to do so, but users report that doing those actions is too difficult, the solution may be a simple one — either don’t be so stingy in awarding points or currency required to do later actions, or lower the costs of those actions.

In the case of your users reporting that they don’t have enough information to successfully perform actions in your app but you know that you are definitely providing that information to them, you may be requiring the users to memorize too much information, and it may be necessary to move (or duplicate) the data display to be closer on the user interface to where the user performs the action needing that data.

Requiring the player to memorize too much information or operate too many controls may be an issue of the app not being too difficult, but being too complex, a problem that we will examine in detail next week.