← One Life Or Many? How Long Should Players Survive In Your Game?
Dice and Drawbridges Inspire Games Designed By Scouts At Balboa Oaks Spring 17 Merit Badge Midway →

Manage Your Game Dev Career By Thinking Like An Entrepreneur 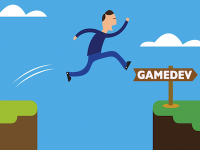 One of my Facebook friends is a fairly well-known figure in the game industry, and today I asked him how things were going at a new venture he joined not too long ago. “Not well,” he confided in me. “I haven’t received a paycheck in several weeks. So, I have to keep plugging along until either I get paid or find a new gig — whichever comes first.” Man, do I empathize with his situation, because I’ve been there too many times myself. In fact, any one out of a couple dozen of my Facebook friends right now who is in a similar professional pickle could be the person who shared this with me.

Many of those thinking about working in the video game industry only consider the imagined rewards of creating a hit game and reaping in millions of dollars of revenues. Unfortunately, the vast majority of game developers simply earn a regular paycheck. Yet a middle-class salary isn’t a guarantee, because the game industry is as full of risk as it is reward, and that risk includes working for months without pay to get a start-up going, or being laid-off from even a successful company when times are tough. According to a survey conducted by the International Game Developers Association in 2014, the average game developer held four jobs in five years.

Working in the game industry involves a lot of risk, and to survive, it helps to think like an entrepreneur. An entrepreneur is a person who organizes and manages any enterprise, especially a business, usually with considerable initiative and risk. In this case, the risky enterprise you need to learn to handle is your own career.

Here are some tips for applying entrepreneurship to a career in the game industry:

Above all, remember that you need to be the one to make things happen for yourself, whatever the odds.  No excuses. No wavering. No delays. If you don’t have the skills or experience you need to land a job in the game industry, get them. Any way you can. And then start knocking on those game studio doors until one finally opens.  And if one day you find yourself kicked out into the street, pick yourself up, dust yourself off, and find yourself a new position. Game development is for those who can’t imagine themselves doing anything else, and if you are truly thinking like an entrepreneurs, you aren’t going to let anything stop you from making your career happen.

Posted on March 20, 2017, in Career Advice. Bookmark the permalink. Leave a comment.

← One Life Or Many? How Long Should Players Survive In Your Game?
Dice and Drawbridges Inspire Games Designed By Scouts At Balboa Oaks Spring 17 Merit Badge Midway →