← A Console Carol
Making Your Own Luck In Games → 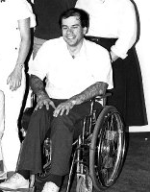 The year 2016 feels like it had more than its share of celebrity deaths and news-making tragedy, but none struck me harder than the recent death of Michael Lieberman. What’s that, you say? You never heard of him? That’s a pity, because he was someone worth knowing. Mike Lieberman was one of the original employees of Edu-Ware Services, the first video game publisher I worked for.

Edu-Ware founders Sherwin Steffin and Steven Pederson met at UCLA, where Steffin was working as a faculty advisor to the campus radio station where Pederson worked as a student. When Steffin was laid off in the spring of 1979, he and Pederson decided to form a software publishing company specializing in educational software for the Apple II. Working out of his Woodland Hills, California apartment, Steffin programmed educational software, while Pederson favored games the games he created while completing his studies at UCLA.

The company expanded beyond the two founders when they hired Mike Lieberman, who, had also worked as a DJ at UCLA’s student radio station, as sales manager.  Now, back in those days, there was no GameStop chain, and WalMart did not sell video games.  If you were a video game publisher, you had to reach out to each of the thousands of individual mom-and-pop computer stores across the country and try to convince them to carry your product.

Mike would do his cold calls from Steffin’s bedroom while Steffin and I worked in the living room of his small apartment creating the games that Mike was responsible for selling.  I vividly remember hearing his voice on the phone behind me as I programmed: “My name is Mike Lieberman from Edu-Ware.  Lieberman.  L-I-E-B-E-R-M-A-N.”  Mike would make hundreds of calls each day, trying to convince stores to carry our games.

And, man, was he successful.  Within six months we had a real office in Canoga Park, California, with our games frequently making SoftTalk magazine’s best-seller lists.  A couple of years later, we moved to bigger offices in Agoura Hills, where our staff swelled up to over fifty people.

And then tragedy struck.  While Mike and a friend were driving Las Vegas in advance of Edu-Ware appearing at the Consumer Electronics Show, their vehicle overturned.  Mike was left a paraplegic.  We were all devastated when we received the news that this good man and dear friend would never be able to walk again.

After a recuperation period, Mike returned to his job at Edu-Ware.  There was no elevator to our second-floor office, and so each morning some of us would lift carry him and his wheelchair up the stairs, and then back down at the end of the day.  Yet never did I see him lose his dignity or his good humor.  He made the best of a terrible situation.

The doctors said that he would live only another ten or twenty years due to his injury.  He eventually succumbed to his injuries last week, a decade or so longer than the doctors had predicted.  During that time, he managed to lead a full life.  After his sales career ended, he did voice-over work and recorded textbooks for the blind.  He also loved music and was never at a loss for a dance partner, I am told.  And now he is untethered from his broken body, and as we celebrate the year coming to an end, I like to think that somewhere he will be celebrating too, as he is finally able to dance on his legs again.

Posted on December 26, 2016, in My Career and tagged EduWare. Bookmark the permalink. 1 Comment.

← A Console Carol
Making Your Own Luck In Games →