← How Halloween Influenced My Career In Game Development
What Can Game Developers Learn From The 2016 Presidential Election? →

This Saturday I again volunteered at a local merit badge midway to run a workshop for the game design merit badge that I helped to create for the Boy Scouts of America. To earn this merit badge, the scouts not only have to create a game of their own design, but also engage in the process of playtesting and redesign for at least three iterations. Now, the average merit badge takes about ten hours of a scout’s time to complete, and Game Design is no exception.  So, in my three-hour workshop, I help scouts to either get started on the merit badge or to finish it up.  And therein lies a problem: how to deal with a dozen scouts at different stages during the limited time I have with them.

To playtest a game in my workshop, scouts must first contact me with a vision statement, play value description, and initial set of rules for a game they want to make, and if I approve it, they can proceed with making a game to bring in.  Only three scouts did the prerequisites this time, but the rest who attended the workshop got to playtest their games.

Here were the games that we playtested. 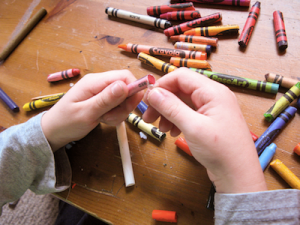 Vision Statement:  Crayon Wars is a free-for-all party game where players uses crayons as money to defeat the opponent.    The game has play value of challenge because you have to practice to be better. It has stimulation because it is exciting and threat because you are challenging each other and it is fun to play

Progression: Players take turns moving play around the circle to the left

The first player can buy something or skip and save up for later.  Each turn players get 2 crayons for money. You can also attack after the first round.

There are 12 items you can buy

To attack, you pick a token to attack with.  It damages the other player’s token or their health the value of your token and your token will go down in value the amount of damage you did.  You can attack the other players health after attacking all of their resources.

Resolution: The game ends when someone’s health goes to zero.

Vision Statement:  Around is a free-for-all board game for 2 to 4 players in which players roll dice to move along a circular path to reach the end.

Set-Up: Players place their pieces at the Start, receives $50 in play money, and then rolls the dice to determine who goes first.

Progression: The game is played in turns.

Resolution: The game ends when one player reaches the Finish. 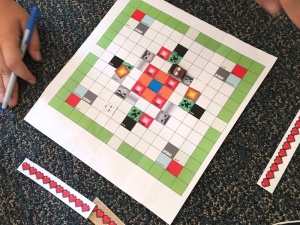 Vision Statement: Diamond Dreams is a Minecraft-themed board game for 2 to 4 players in which players try to reach a diamond block that rules everything.

Set-Up: Players place their character in one of four gray boxes around the edge of the board and are given 10 health points.  Players role a die to determine who goes first.

Progression: The game is played in turns.

Resolution: The game ends when one player reaches the Diamond.

Of the three games, I’d say the scouts most enjoyed Diamond Dreams.  It had the best presentation, the most complete rules, and the greater depth of game play.  Of course, earning a Game Design merit badge is not about creating the best game, but learning what it is like to be a game designer — that the game does not end with the initial design, but is refined and polished based on the experience of the players who are playing the game.

← How Halloween Influenced My Career In Game Development
What Can Game Developers Learn From The 2016 Presidential Election? →