On September 28, I was on a panel with International Game Developers Association Los Angeles Chapter President Brandii Grace and New York Film Academy Los Angeles Campus Instructor Scott Walker that judged game prototypes developed by attendees of our Game Design Paper Prototyping Workshop.  Participants were given a supply of materials — paper, marking pens, dice, tokens, meebles, and so on — and about two hours to create a game prototype.  The teams then presented their games to us, and we chose a winner.

Here are the prototypes they presented.

Ark by Eric and Friends

This is a single-player resource gathering game. The player is commander on a space station orbiting Earth, and you are directing eight cities to collect resources for building a spaceship. Each city produces a specific resource: green is for minerals, yellow is for fuel, and blue is for research. In each orbit (round), the player would select which resource a city would produce by placing a coin on a card whose color represented the resource to be produced by that city. After each round, the resources produced would be calculated, and the objective would be to collect 20 points of each resource to build the Space Ark. However, a random dice roll will determine after each round which city gets destroyed by being eaten by frogs, and so you have fewer and fewer cities for building resources as the game progresses. You also lose coins for producing resources after each round – first five, then four, three, two and one — and so the player needs to be more and more careful about which resources to collect during each orbit.

The judges thought this game had a good balance between simplicity and depth — and really liked the city-eating frogs — but were concerned that the gameplay wasn’t made sufficiently clear by the game’s layout.

Car Chase by The Insurgents

The objective is to collect as many points as possible. There are two ways to score points. One is to keep them on your persona when you collect them. The other way is to store them in a bank, where the points would be worth only half as much. Players have eight turns to collect coins, deciding which to keep on them and which to deposit when you land in any one of the banks in the four corners of the game board. There are also four monsters moving around the board, and they are assigned according to a dice roll, moving the number indicated on the dice clockwise around the board. If a monster collides with you while you are moving, you lose any coins you are holding but not coins in the bank. During each turn, players first commit to a direction in which to move but then must move the monsters before moving their car.

The judges like the strategy aspect of this game but thought it needed a better system of keeping track of which coins where in the car and which were in the bank.

In this two-player game, the goal is to collect as many coins as you can and bring them back to your storage. Each player has control of their own car and the opponent’s monster that is chasing them. Players take turns shuffling their respective deck and drawing three cards from it. Players choose two cards, using one to indicate the number of moves for the car and another for the number of moves for the monster. Players first move their car the number of indicated moves on the board along the blue lines, which were divided into stopping points indicating the number of movement points required to go to the next point, and then the same with the monster along the green lines. Your car can only hold up to two coins per run, and if it is intercepted by a monster, it loses a coin. The game is over when a player collects 4 coins, runs into the monster three time, or have the most coins after two full reshuffles.

The judges recognized this as a board game version of Pac-Man and thought it was a cool concept; however, they found the layout of the paths confusing, particularly since the car had one path and the monster had another path. Other problems were that the monsters didn’t move sufficiently to be a real threat to the cars and that the coins placed on the board covered the number indicating the movement points required to get past each stopping point. 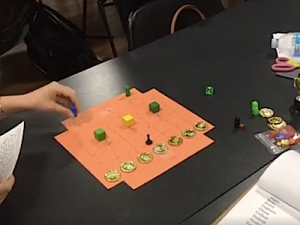 This is a collect-and-chase game in which the neighborhood bully is stealing candy from trick-or-treaters. A six-sided dice determines the players’ moves as they travel to the houses to get candy and then try to bring it back home, where it is safe. However, if the bully rolls the exact number to hit a player, the bully beats up the player and takes their candy away. If the player doesn’t have any candy on them, they still get beat up and have to go back to the start. Players can cooperate together to block the bully, and hedges in the middle of the board act as boundaries to restrict movement. Players are also permitted to share a space to prevent the bully from beating up one of them.

The judges declared this game to be the winner because of its appealing theme and engaging gameplay.

Overall, it was a very successful event and it is always fascinating to see the inventive games designers can create with such limited resources.