Lessons Learned About The Use Of Randomness In Games 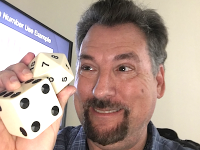 Like many other people of my generation, the very first board game I played as a young child was Milton Bradley’s Candyland. The game involves players finding King Kandy, the lost king of Candy Land, by traveling along winding, linear track consisting mostly of red, green, blue, yellow, orange and purple spaces. Players take turns removing the top card from a stack, most of which show one of six colors, and then moving their marker ahead to the next space of that color.  There is no strategic skill involved in playing the game: the winner is essentially predetermined when the cards are randomly shuffled at the start of the game.

I soon moved on to another Milton Bradley board game, The Game of Life. The game depicts players’ travel through life, from college to retirement, with jobs, marriage, and possible children along the way. Here, one random element takes the form of a wheel at the board’s center that players take turns spinning to determine the number of spaces they move along the game’s track. There are a handful of intersections where players choose to go one direction or another as well handful of choices about insurance and investments, but for the most part it too is a game of luck.

Eventually I graduated to the Parker Brothers real estate game, Monopoly.  As most readers know, this is a game in which the player’s roll two dice to determine the number of spaces they move clockwise around the board, and depending upon which space they land on, making decisions about whether or not to buy unowned properties, paying “rent” to players who own property, or drawing from shuffled cards for randomly determined helpful or harmful events.

While the dice and cards do offer a significant amount of randomness, the gameplay does involve strategic, resource management and negotiation skills.  Whereas games like Candyland and Life, in which luck largely determines a player’s success, engage only the youngest of players, a game like Monopoly, where a certain amount of skill is necessary to do well in the game, can remain engaging to players for many years after being introduced to the game.

One lesson that game designers can learn from playing games like this is how to balance the amount of randomness in the game against a player’s skill level.  All game’s need a certain amount of skill — from understanding the basic procedures and rules of the game to making strategic decisions about how to achieve the game’s goals.  However, randomness can be used help players succeed in a game despite low skills.  Now, while luck-based games can be appealing to children, games in which randomness largely determines success can cause older players to feel a lack of control, or worse, feelings of hopelessness, while playing the game.

While a game designer can allow for the occasional random event that can progress low-skilled players forward or set back very skilled players to level the playing field when players of different skill levels are playing against each other, the amount of randomness in a game should not negate player skill entirely.  This is something you can gauge when playtesting the game with other players, who can tell you if they feel their decisions do not really matter in determining whether they win or lose the game.

I learned a lot about game design by playing board games and seeing the role randomness played with spinners, card, and dice, but my higher-level education in-game design came about when I entered college and learned about Dungeons & Dragons from my classmates.  Dungeons & Dragons is, of course, the famous tabletop role-playing game in which players portray characters embarking upon imaginary adventures within a fantasy setting.

An essential component of this game is a set of polyhedral dice, which have 4, 6, 8, 10 and 20 sides.  These are not only for determining the outcome of player decisions in the game, but also for a very important use of randomness in a game: variety and surprise.  As Jason Vandenberghe explained in his GDC 2012 talk, The 5 Domains of Play,  Novelty is the presence or lack of new, interesting, dramatic, or beautiful things in the game, and is one of the major determiners of whether a player likes a particular game.  Dungeons & Dragons is a game based on a very high degree of Novelty, not only from the interesting and dramatic scenarios forming the role-playing aspects of the game, but also from surprises and variations introduced by the random elements.

For example, a typical Dungeons & Dragons scenario might involve a party of players having a random encounter with a creature in a forest clearing.  However, the type of creature it is — whether it be a common deer or a very uncommon unicorn — is determined by a role of the die.  This allows players to play the same scenario several times but have very different experiences due to the variety of the encounters.  The trick for the game designer, though, is to make sure that the variation is still within the player’s skill level, so that players are not too often presented with surprise challenges that are beyond their ability to overcome.

It was as an adult that I most began to appreciate another use of randomness in games, and that was through my experience playing games of chance in Las Vegas.  I’ll never forget the excitement of watching the roulette wheel at Caesar’s Palace as the steel ball go ’round and ’round, and the anticipation that built up inside me waiting to see which slot the ball would fall into.  Yet, I felt a different emotions, those of tension and suspense, when sitting at the blackjack tables and not knowing whether the money I bet would be lost or whether my risk would be rewarded.

In games of chance, randomness does play a huge role in determining a player’s success.  However, unlike games of pure luck, the player does make choices that also help determine his or her success.  Yet in some games, like blackjack or poker, some of the information for making those decisions is hidden from the player, and this situation can stimulate feelings of thrills and anxiety.  Other feelings, those of excitement and suspense, can occur when there are known and palpable risks, such as losing sums of money, while playing a game.  Game designers, by balancing the amount of randomness, information, risk and reward in a game can similarly spark a range of emotions in their players.

So, as I graduated from games of luck to games of chance in my game playing education, here is what I learned about how to properly use randomness in games:

Posted on September 12, 2016, in Game Design and tagged board games, game design. Bookmark the permalink. 2 Comments.