In Celebration of Game Dev Independence 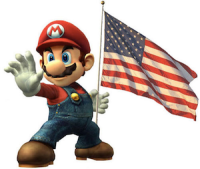 Almost every student entering my game production class as well as just about everyone else who asks me questions about game development has dreams of becoming an “indie developer”.  But very few understand what the term means, because they also have ambitions of creating “AAA games.  So, one this day, when we Americans are celebrating the anniversary of the day that the United States declared its independence from England, I thought I would write about what it means to be an independent developer.

Independent video games (commonly called indie games) are video games created by individual developers or small teams generally without video game publisher financial support.  Now, why would that be attractive to a developer.  Well, nobody gives or lends money without also exercising some level of control to help make sure that they will earn their money back.  And so, by accepting a publisher’s financing, a game developer was giving up control over their game.

For many years game developers had no option other than to make a deal with a publisher like Activision or Electronic Arts, because they had the distribution networks for getting games onto the retail shelves of Electronic Boutique, Game Stop, Best Buy, and WalMart.  Small game developers just didn’t have the sales force and clout to go to the store buyers independently.  Instead,  they approached a game publisher, and it was the publisher what games were worthy of their investment, passing on games that they judged to be too different from what they were used to selling.  Once the deal was signed, the publisher was very careful to safeguard their investment by closely monitoring the game’s development, demanding changes that they thought would make the game more salable, even if those changes conflicted with the developer’s vision.  And if the developer refused, the publisher would withhold the next development payment and even threaten to cancel the project entirely.

How did game developers come to escape such tyranny?   It happened in what I will call The Steam Age.

The Steam to which I am referring is the digital distribution platform developed by Valve Corporation and released in 2003.  Before developing Steam, Valve had experienced problems updating its online games, such as Counter-Strike; providing patches would result in most of the online user base disconnecting for several days. Valve decided to create a platform that would update games automatically and carry out stronger anti-piracy and anti-cheat measures. Valve also recognized that at least 75% of their users had access to high-speed Internet connections, which would only grow with planned Internet expansion in the following years, and recognized that they could deliver game content faster to players than through retail channels.

Valve began negotiating contracts with several publishers and independent developers to release their products through its Steam distribution platform.  Many indie developers saw Steam as an opportunity to reach their players directly without publisher interference, and by early 2011, Forbes reported that Steam sales constituted 50 to 70% of the $4 billion market for downloaded PC games and that Steam offered game producers gross margins of 70% of purchase price, compared with 30% at retail.

Of course, Steam was not the only digital distribution alternative to the big game publishers.  Other digital distribution services that followed. The years after 2004 saw the rise of many digital distribution services on the PC, such as Amazon Digital Services, Desura, GameStop, Games for Windows – Live, Impulse, Steam, Origin, Direct2Drive, GOG.com, and GamersGate.  Other alternatives include game portals like Addicting Games, Kongregate, Mind Jolt, Games2Girls, and many others.  Mobile game developers also found a way to around the game buyers at Verizon, Sprint, and T-Mobile when Apple launched the App Store for its iPhone, soon followed by Google Play for Android phones.

However, distribution was not the only reason game developers went hat-in-hand to publishers.  Games cost money to make, so without a publisher to act as the bank, how can an indie dev get money?  Well, here are some ways to fund projects:

Once you get enough funding to start up your company, then there is all the business of actually running a company: renting office space, acquiring business licenses, purchasing equipment, hiring staff, getting insurance, setting up internet and other utilities, paying taxes, and all the other accounting, office management, and human resources tasks.

Developing a game is difficult and expensive.  You need to face the fact that you are not going to be building a AAA game like God of War or Call of Duty: these are the games that have the largest budgets and highest productions values.  Instead, aim for simple and small.  Now, that doesn’t necessarily mean poor quality, and it’s better to offer an hour of great fun than forty hours of mediocre gameplay.

In addition to developing your game, you need to advertise it and build an audience.  Don’t simply think, “If I build it, they will come.”You also need to be ready for the fact that your first game won’t be all that great.  It might take you several tries to develop a decent game, and even longer before you actually have a money-maker.  For example, Rovio developed 51 games and almost called it quits before coming up with Angry Birds.

And that’s why we should celebrate indie game development.  Despite all the difficulties and obstacles, indie developers still manage to create great games like Angry Birds, Super Meat Boy, and Minecraft.  It is thanks to these tireless freedom fighters who give the rest of us something different to play instead of the umpteenth sequel to the same ole, same ole.  Indie devs, I salute you!

Posted on July 4, 2016, in Game History and tagged indie development. Bookmark the permalink. Leave a comment.