Apparently writing this blog qualifies me to be a member of the game industry press. A couple of week ago I received a media invitation to attend The PC Gaming Show that was live streamed today from The Theater in Ace Hotel in downtown Los Angeles, where I just happened to be working on a consulting gig about five blocks away.  So, I took an extended lunch hour to attend the event and bring back this report to you, my loyal readers.

The PC Gaming Show is the second annual event for video game developers, publishers, hardware companies, press and  fans during E3, the Electronic Entertainment Expo, which opens at the Los Angeles Convention Center tomorrow.  The event, a live-streamed on Twitch and YouTube Gaming, was created by PC Gamer magazine to shine a light on exciting, innovative and unconventional projects happening across the personal computer world.  The sponsors this year included AMD, Bohemia Interactive, Frontier Developments, Razer, and Tripwire Interactive, and it was the first time that the show was free and open to the public (which kind of diluted the coolness of my media invite).

The venue for the event was a delicately restored, 1,600-seat movie palace from the 1920s with a three-story, 2,300 square foot grand lobby, an ornate open balcony and mezzanine and a vaulted ceiling with thousands of tiny mirrors that glimmer when lit.  The theater is the flagship theater for the movie studio United Artists, and like many movie theaters, the seat rows sink in toward the front of the orchestra section, so ticket holders there must look up at the stage.  However, this time ticket holders were not to see a movie, but the latest in gaming for personal computers.

As a warm-up act before the show, there were AMD computers in the lobby set up for playing such games as open world military tactical shooter Arma III from Bohemia Interactive, space trading and combat simulator Elite: Dangerous from Frontier Development, and action-adventure stealth game Hitman from IO Interactive. I tried my hand at zombie apocalypse FPS Killer Floor 2 by Tripwire Interactive and was very please with myself for wiping out a legion of Zeds before it was time for the show to begin.

The 90-minute show (thankfully, an hour shorter than last year’s overlong show) opened with an on-stage shopping spree, “The Steam Speedrun presented by Razer,” where one lucky gamer had the chance to fill her Steam electronic shopping cart with as many games as possible in three minutes, all on Razer’s dime — $1152 worth of dimes, in fact — as well as a full set of Razer peripherals.  But she said her favorite catch was a copy of the new Doom from Bethesda Softworks (who says women don’t like to play FPS games?)

Next, Sean Plott, an e-sports commentator for StarCraft II and a former professional StarCraft: Brood War player who goes by the handle “Day[9]”, hosted mixture of screenings of the latest game trailers along with exclusive new footage, updated details on popular game franchises, and conversations with their developers on a set resembling a late night talk show. He’s a funny, charismatic guy whose voice reminds me of Jim Parsons from The Big Bang Theory.  Day[9] had good chemistry with a whirlwind of developers, many of whom wore rainbow ribbons in sympathy for the victims of the tragic Orlando shoots just the day before.. 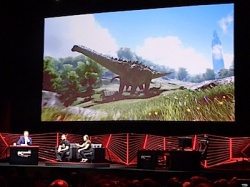 First up was Jesse Rapczak, cofounder of Studio Wildcard, to discuss Ark: Survival Evolved, an action-adventure survival game in which players can feed, tame and ride over sixty types of dinosaurs.  Players must gather resources to craft weapons and shelters for surviving in this primitive and dangerous environment.  The game blends cooperation between players and competition between groups.  Mods, Rapczak says, are also a big part of Ark, and the development team has already decided to use a community-made mod that minimizes technology and includes more resources for living off the land as an official mod for the game, which will be released at the end of the year.

Modding was also an important aspect of the next game, Mount and Blade II: Banner Lord, a stand-alone expansion pack developed by the Turkish company TaleWorlds Entertainment for publisher Paradox Interactive.  The expansion features a new multiplayer mode that allows for up to 250 players, split into two teams, to wage siege combat using catapults, ballistas, and battering rams without the RPG and map elements from the single-player mode.  Community manager Frank Elliot said that the fan community were an essential part of developing this “prequel” game, as the development team provided them with all the development tools needed to make mods.

Community-made mods was not the only feature discussed by PC game developers; virtual reality was another hot topics.  Advanced Micro Devices President and CEO Lisa Su came onstage to discuss all of the hardware her company is manufacturing to support vr in games.  AMD is angling to lower the cost of virtual reality, targeting the field with a new line of graphics hardware priced at $199—half or less the cost of comparable products. Su said the first chips based on its new Polaris design are expected to arrive in graphics cards for personal computers at the end of June. The company aims to help push the starting cost of PCs that can deliver VR experiences as low as $799 from above $1,000.  Su also showed off Alienware’ virtual reality backpack, which resembled something Tom Cruise might ware in a futuristic warfare film, designed in conjunction with Zero Latency’s free-roam multiplayer VR experience.  However, the device is still an early working concept that doesn’t even have a name as of now.

Virtual reality’s impact on gaming was demonstrated by Tripwire Interactive’s John Gibson. Although he initially came out to discuss Killing Floor 2 and its new features he was shortly joined by Anna Sweet of Oculus to announce that soon players will be able to blast open heads and scatter entrails in vr, courtesy of Killing Floor Incursion developed for the Oculus Touch, a a pair of controllers used for the Rift in selected VR games, and are mirrors of each other – one for each hand. They are lightweight, wireless handheld motion controllers featuring a joystick, buttons, and two triggers- one for grabbing and one for shooting or firing. The controllers are fully tracked in 3D space by the Constellation system, so that the user sees them in virtual reality responding to their real world counterpart, giving the user the sensation of their hands being present in the virtual space. 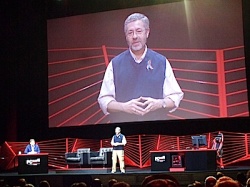 The show ended with legendary game producer Warren Spector coming on stage to support development for PC games.  He reminded the audience that all development work is done on PC’s, and that’s where innovation comes from.  Personal computers grow in capability as technology advances, and developers take advantage of that and the hardware’s open architecture.  Consoles may have consistent controls, but that’s also their weakness.  The core of PC gaming is its mouse and keyboard interface, giving players control that they can also customize.  It is, Spector says, the only truly democratic gaming platform.

Of course, there were many more games presented at the event, but unfortunately that’s all I have time to write about now — I have a trade show to see! But as someone who started his career developing PC games, it was exciting to “media representative” to this event, and while PC gaming has steadily been losing market share to consoles, online, and mobile, it’s a platform that’s still alive and kicking.