← How To Find A Job As A Game Artist
Why Do We Play Games? →

Twice a year I attend demo days at the University of Southern California’s GamePipe Showcase to see what game engineering students in the world-renowned USC Games program have accomplished. This semi-annual event features the work of multidisciplinary, collaborative teams of programmers, artists and game designers, who demonstrate to event attendees the games they conceived, designed and built for various platforms, including work from USC’s mobile, networked artificial intelligence, immersive and advanced games courses. The event introduces students to host of industry scouts who may purchase and produce the games for mass audiences, as well as hire program graduates to develop the games of the future.

Last week I attended the Spring Showcase event hosted by USC Viterbi School of Engineering Professor Mike Zyda at the USC GamePipe Laboratory EGG-Building, where the culmination of more than a year’s worth of student teams’s collaboration, creativity and engineering is presented. This time I was particularly interested in augmented and virtual reality projects because these are hot topics in game design right now, USC has been in the forefront of virtual reality development (former GamePipe Lab instructor Laird Malamed is now Chief Operating Officer of Oculus VR, developers of the Oculus Rift VR headset) and I happen to be doing some consulting with a client in those areas.

Here are some of the projects that captured my attention last week.

Your camp has been overtaken. Fire and ash overwhelm the camp. The only thing between you and freedom is a few miles of train track…and a huge, menacing dragon!  Dragon Runner VR is a virtual reality game developed using the Samsung VR Gear and Microsoft Kinect, allowing players to step into a 3-D virtual world where they must dodge under bridges, dart around rocks, and skillfully move around their cart as you escape the fireballs.  I managed to get in my day’s exercise by dodging obstacles, crouching to avoid low-hanging barriers, and using my arms to fling fireballs at scaly enemies.

The five-person student team that developed the game have formed a company to make a meaningful impact in the emerging virtual reality and immersive environment platforms. You can learn more about the team and their projects on the Void Dimensions website. 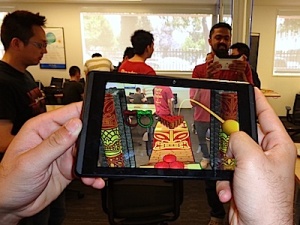 I found this game to be a lot of fun to play.  Players move their fingers along the left edge of the screen to set the trajectory and force of a ball so that it flies through a floating hoop and into a beer bottle for points.  Seeing your opponent in the game’s background adds to the social and immersive experience of the game.  To find out more about the game and the team that developed it, watch this YouTube video.

This zombie apocalypse virtual reality game was developed for iOS and Android using Google Cardboard. The story premise is that a global viral pandemic wipes out over 80% of the world population, causing the dead to rise and feed on the living. Players travel automatically through their environment and must shoot zombies coming towards them using three choices of guns : pistol, rifle, fire gun. Players can change weapon by looking down and clicking the menu. Different guns cause levels of damage to zombies. Players can also shoot the power-up packages to recover their health. 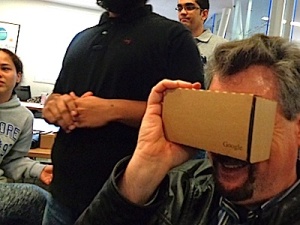 I found using the Google Cardboard, which is a VR headset quite literally made from cardboard into which a mobile phone running the game is mounted, to be a much more enjoyable and immersive experience than heavier headsets like the Oculus Rift. Yet while I liked the zombie apocalypse theme, I would have preferred more freedom of movement than this rail shooter game provided.

ZombieEscape VR was developed by a six-person team lead by Saksham Kashyap over a three-month period. You can learn more about the game and the team that developed it by visiting its website.

As always, the creativity and technical prowess of the USC Games students was impressive, and it was exciting to see how these kids are bending our reality to create a new gaming future.

← How To Find A Job As A Game Artist
Why Do We Play Games? →