More Treats Than Tricks At IndieCade

When I was a kid, I loved going trick-or-treating on Halloween: dressing up in costume, going from house to house, and filling my bag up with treats. I was crushed when, as a highschooler, I went to one house where I was told, “Aren’t you a little old for this?” and I realized it was all over. Fortunately, one is never too old for video games, and on the weekend before Halloween, I went from booth to booth at IndieCade, where I was able to indulge my sweet tooth for all things interactive. 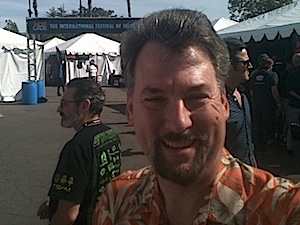 The IndieCade Festival, or The International Festival of Independent Games, is a yearly event, held in Culver City, California since 2009, featuring indie games from around the world, an annual award show celebrating 12 different innovation award categories, and a three-day conference including a professional conference track, business networking, social activities, tournaments and entertainment, as well as fun programs for the entire family. The Festival is not just a celebration of indie games, its creators and the innovation within the industry. It also curates and recognizes those that the organizers identify as the top indie games of the year. More than 200 games of all types are selected by the Festival Jury and were made available to play. 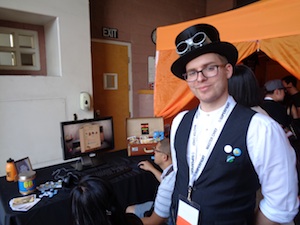 One of the games I played was an IndieCade finalist called 60 Seconds!, created by Polish game developer Robot Gentleman Studios, who describes the game as “a dark comedy atomic adventure of scavenge and survival.” The premise is that the government’s early wanting systems gives you just 60 seconds to take cover in the fallout shelter under your house. During that one minute, you must make a mad rush through your procedurally generated house to gather all the supplies you need to survive. The decisions you make in the first 60 seconds will determine how the rest of the game will play out. How many days will you last? Will there be enough to eat? Can you risk going outside. It’s an interesting twist, front-loading many of the player’s decisions. It was a fun game to try out, but I have to admit… I was even more intrigued by the game developer’s hat. 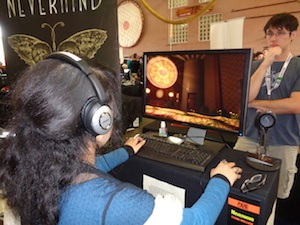 Another game I played was just the thing to get me in the Halloween spirit. Nevermind is a biofeedback-enhanced adventure horror game that takes you into the dark and twisted world of the subconscious. As you explore surreal labyrinths and solve the puzzles of the mind, a biofeedback sensor attached to your ear monitors how scared or stressed you become moment-to-moment. If you let your fears get the best of you, the game will become harder. If you’re able to calm yourself in the face of terror, the game will be more forgiving. The game started as a 2012 MFA thesis project at USC’s Interactive Media Program, led by game developer Erin Reynolds, who returned to academia to pursue new ways to create “positive” games for traditional gaming audiences. After an academic year, Erin and the Nevermind student development team were able to create one fully-functional level—a proof of concept that demonstrated Nevermind’s unique vision and the feasibility of the core technology. The game is now available on Steam for Windows and Mac.

Virtual reality had a big presence at IndieCade this year, with about a quarter of the booths having virtual reality headsets. One that I played was Xing: The Land Beyond, a first-person puzzle adventure game. Players find themselves on a mysterious floating island, in an afterlife where they must uncover secrets as to who they are and why they are there. Gameplay involves exploration, solving environment-based puzzles and gaining/using powers such as rain and snow to progress through levels. Developer White Lotus Interactive began the game in 2013 as a Kickstarter project and hope to launch it next year. Developed using Unreal Engine 4, the game features 3-Denvironmental puzzles, an integrated day-night cycle, weather control, and a story told through poetry. 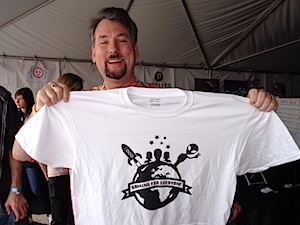 One interesting game I played in the Gaming For Everyone pavilion was one designed for players with sight impairment. Turning off the Screen‘s initiative is to take a closer look at accessibility in game design, development, and architecture in order to open games to an even bigger market. Turning off’s current project is adapting Fullbright’s debut game Gone Home to take a closer look how to modify existing games that have already been enjoyed by audiences in order to look at what goes into universal design.

Speaking of advocacy, a welcome sight for me at any industry event is the Extra Life booth. Extra Life is a charity organization of gamers doing what they do best to help sick and injured children at their chosen Children’s Miracle Network Hospital. Simply sign up, commit to play games for 24 hours from November 7, 2015 – November 8, 2015 (or any day of your choosing), and ask your family and friends to support your efforts! The money that you raise through Extra Life will go directly to your chosen Children’s Miracle Network Hospital as ‘unrestricted funds’. This means that the hospital decides where and how to spend the money to ensure the dollars you raise make the biggest impact in the lives of the kids they treat. For example, the money you raise will go to fund research and training, purchase life-saving equipment and pay for uncompensated care.

And that concludes my wrap-up of my Saturday afternoon at IndieCade. I came to see all the games, and left feeling impressed by the ingenuity and devotion of the independent game development comment and by all the advocacy groups that seek to turn games into a meaningful experience for people.