← Can You Develop A Game With No Experience And No Money?
Real-Life Escape Rooms →

Why Aren’t More Games Developed For The Macintosh? 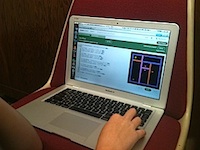 Every student attending The Los Angeles Film School, where I teach game production, receives a laptop loaded with all the software they need to do their classwork. Most of our students, not surprisingly, are enrolled in our film program, and they receive Macintosh laptops. However, the students in our Game Production program receive PCs, since most games are developed on PCs and made to run on the PC. In fact, very few games are made to run on the Mac.

That begs the question of why. Why is it that very few games are made for the Macintosh?

The Macintosh never gained traction as a gaming machine. When it was first released in 1984, it had a black-and-white screen as well as a closed architecture, preventing other hardware manufactures from making sound cards, graphic cards and peripherals that would make the computer more appealing to gamers.

These problems were corrected with the Macintosh II, which came out in 1987 at a price of $5,498. However, the high price tag of Macintosh computers cemented its public perception as a boutique item, a creative tool mostly used by those working in artistic fields. Meanwhile, the competition between PC clone manufactures, helped keep their prices low, and the PC became ubiquitous in both the office and the home.

It has always been a hassle for game manufactures to support multiple platforms, because a game is continuously being refined throughout its development, and yet the ideal is to release all versions of the game released on (or near) the same date. That means keeping multiple development teams in synch, which is extremely difficult to do.

During the 1980’s, game developers had to be worried about supporting the Apple II, Commodore 64, Atari 400/800, Commodore Amiga, and Atari ST, in addition to all the PC clones, and that doesn’t even count all the multiple console systems that have existed at any one time. It just was never worth the expense and effort for game developers support the Macintosh as well.

And that’s really too bad. A company I worked for a few years ago mostly developed browser-based games. All of our development work was done on Macs, and when I left the company, I took my MacBook Air with me. It’s a terrific laptop, and I’m using it to write this blog. It’s a shame I can play so few games on it.

← Can You Develop A Game With No Experience And No Money?
Real-Life Escape Rooms →