← How Do Game Designers Miss The Flaws In Their Games?
Memories of H.R. Giger → 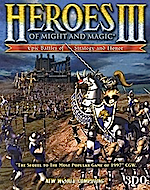 A Quora user asked me how feasible it was to release episodic game levels as downloadable content every six months.

We actually did that with the Heroes of Might & Magic series. Following the release of HOMM3 and its two expansion packs, we released a series called “Heroes Chronicles”, a series of 8 story-themed campaigns over the span of a year. The concept behind Heroes Chronicles was to create a series of low-budget, low-priced titles to generate sales revenue between the big releases.

I don’t recall how well the experiment went from a financial perspective, but looking back, one problem I see was that the product-cycle for games are so short-lived, customers with tight budgets only have to wait a few months after a AAA game is released to buy it for a much-reduced price at the bargain bin. Plus, now with so many independent developers, there are many low-priced original games available, that titles that are merely episodic levels just aren’t that attractive to game consumers.

Posted on April 28, 2014, in Game Design. Bookmark the permalink. Leave a comment.

← How Do Game Designers Miss The Flaws In Their Games?
Memories of H.R. Giger →