The Gamification of America, Part 3 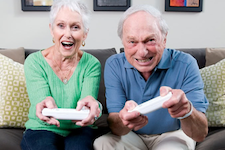 This is the third part of a presentation I gave at the USC Institute of Multimedia Literacy about my career and recent developments in the game industry. In Part 1, I discussed how indie development and digital distribution now allow for a greater variety of games, much as it was when the game industry was in its infancy. In Part 2, I discussed I discussed the elements that make an activity a game: fun, goals, rules, conflict, choices, and a win/loss condition. In Part 3, I look into those elements in more detail.

Well all know what “fun” is, right? Well, maybe not. What’s fun for one person is not necessarily fun for another. Every player has an opinion about what is enjoyable or engaging, but most will agree that a fun activity is one that has several of the following qualities:

A game’s objectives or goals provide a sense of progression towards advancing to the game’s ultimate win/loss state. Some of the qualities goals must have for the game to be engaging are:

A game’s rules should be reasonable: they must be easily understood by the players and be consistent with the game’s story or theme. Rules define the three phases of a game:

Choices are the decisions that the player makes in his or attempt to achieve the game’s goals. Goals should have the following qualities:

Conflict occurs when the game’s rules, resources, or opponents become obstacles between the player and his or her goals.

Feedback provides the player with information about the game’s rules, how he or she is progressing through the game, and whether the goals have been achieved.

As a game comes to its resolution, or ending condition, players should know whether they or not they have achieved the game’s goals. For the win or loss to be satisfying:

In Part 4, I will look at how game design techniques can be applied to activities that are not, strictly speaking, games.

Posted on June 3, 2013, in Game Design, Gamification, My Career. Bookmark the permalink. Leave a comment.