← Why Do Game Developers Crunch?
Girl Scouts Are Gamers Too With New Videogame Patch → 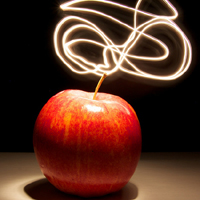 Last Saturday I attended an event called Hack The Classroom at Loyola Marymount University. Aimed at K-12 teachers working at the Archdiocese of Los Angeles, the six-hour program consisted of talks on the future of technology in education and hands-on workshops on how to hack your classroom with the top iPad Apps, Google Docs, and other technology. My wife, a Catholic high school teacher, had invited me to go with her, and since I was about to head up development of a educational software project myself, I was interested to attend.

Not having been inside a school in over thirty years — aside from visiting my wife’s classroom, attending my children’s open houses and delivering an occasional talk to students about game development — I really didn’t know much about changes in teaching approaches that had taken place since I was a kid. I was immediately blown away by the keynote presentation about technology as core curriculum, which related the evolution of educational thinking, from traditional (Web 1.0) to current (Web 3.0).

Whereas education in my youth was closed and industrial, the current view is that education should be open and ubiquitous.

Most surprising to me was the concept of “flipping the classroom”: the idea that teachers should present their lectures at the student’s home (via online presentation software), and that “homework” should be done in the classroom so that students having problems can be assisted by teachers or more advanced students acting as tutors. This is a form of blended learning which encompasses any use of technology to leverage the learning in a classroom, so a teacher can spend more time interacting with students instead of lecturing.

There are plans for future Hack The Classroom events organized for other educator groups. You can learn more here.

← Why Do Game Developers Crunch?
Girl Scouts Are Gamers Too With New Videogame Patch →