How Video Game Music Is Produced 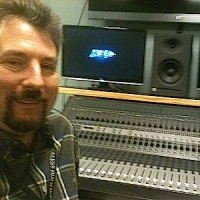 There a many articles about video game art, but one should never underestimate the role the music plays in a game’s aesthetic experience. It is an essential element for immersing the player in the game world and is perhaps the most powerful tool a game developer has for evoking the emotions that the game designer wants the player to feel at various points in the game.

Whenever I’m in need of original music for a game I’m producing, I consult my “Rolodex” to find a music professional who specializes in video game music. Like many other game producers, I tend to work with people I’ve had great experiences with previously, like Rob King, who produced all of the music for the Heroes of Might & Magic series. Rob is a full-service audio guy, who can handle my music, sound effects, and voice-over needs. He works with a number of professional voice-over actors and musicians who he can bring into the studio to record.

Occasionally, I’ll have the opportunity to work with a composer from the film industry. My manager at Cyberdreams introduced me to John Ottman just before he became famous for being the editor and composer for all of director Brian Singer’s films. I hired John to compose the soundtrack for I Have No Mouth, And I Must Scream, and he whipped up about a dozen pieces of terrific music that he recorded on his synthesizer, while also composing and editing Singer’s film The Usual Suspects.

Because we game producers tend to use the same audio experts over and over, it is really tough for new people to break into the field. However, it does happen. A couple of years ago, I went to an International Game Developers Association meeting, and an aspiring young game producer gave me her card. When I got home that night, I decided to go to her website and listen to her portfolio samples, and I was blown away by how good her music was. I tried to hire her for my next project, but she had already been hired away by a big studio.

Sometimes when I’m working on a game with a very tight budget, I’ll license pre-recorded music from a sound library. Whether searching through music libraries for pieces I want to license or hiring a composer to write new music, I meed to first determine what style of music I want to have in my game, and the mood I would like each piece to convey.

At minimum, I want there to be three tracks in my game:

What differentiates creating a soundtrack for a video game than one for a film or television show and what creates the biggest challenge is that the composer does not know how long each of these sequences need to play. It all depends on the player’s interactions with the game. Therefore, each piece needs to be loopable so that it can play repeatedly until a new sequence of the game begins.

There may be other musical pieces required for the game:

Another piece of information I need to provide is what format I would like the music to be delivered in, such as MIDI or WAV. For WAV files, I need to specify the sample rate (the higher the sample rate, the better-sounding the music but the larger the music file) and whether it should be mono or stereo. I always make these specifications in consultation with my technical director.

As with many things in game development, success is all in the planning and picking the right person to work with. Most of the time, I simply plug in the music that is delivered to me and I’m delighted with the results.

Posted on January 28, 2013, in Game Production and tagged Heroes of Might & Magic, I Have No Mouth And I Must Scream. Bookmark the permalink. 2 Comments.