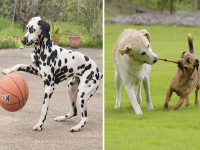 Last week we adopted a Golden Retriever named Grady. His personality was very different from our previous dog, Scout, who had recently passed away after being part of our family for fourteen years. Scout was very much a loner: he would spend much of the day snoozing under the dining room table, and when we had to leave for the day, we simply left him in our den by himself with food, water, and his bed. Every evening he’s like to play with me for about five minutes, but when I took him on walks, he would bark at passing dogs and people he didn’t know.

Grady is the polar opposite. He follows me from room-to-room and is always ready to play or cuddle. He is a pleasure to take on walks, wagging his tail happily whenever we pass by someone else walking their dog. However, he does not like being left alone. We tried keeping him in den while we went out for a couple of hours, but when we returned, he had gnawed away half of the door frame, trying to get out.

There are many different elements that a game designer can use to engage a player in a single player game: a compelling story with interesting characters in an immersive environment; activities that allow for the construction of game items and other forms of creative expression; the exploration of uncharted territories and the discovery of Easter eggs and other surprises; completing a task before a countdown timer runs down; gathering rare items and completing collections; solving puzzles and overcoming other obstacles; surviving a situation for as long as possible; or earning achievements and besting one’s own record.

There are also many elements of either a cooperative or competitive nature that appeal to players in multi-player games: storytelling and role-playing with other players; fulfilling group quests; being the last one standing in an elimination contest; becoming the king of the hill in a goal that can be achieved by only a single player; or simply having the opportunity to meet and chat with other players.

One thing to remember is that a game doesn’t strictly have to be a single-player or a multi-player experience. Sometimes introverts enjoy the company of others, and even extroverts need their alone time. So, it is quite permissible to combine single-player and multi-player elements in a game, either to give each player an opportunity to change their playing habits for a time or to appeal to a broad audience.

Another thing to bear in mind is that even players who prefer the single-player experience may like to interact with other players but not necessarily in real-time. For example, someone who likes single-player games may like having their score posted on the scoreboard either to boast about how high their high score is or to have the goal of being someone else’s score. Players in single-player games may enjoy opportunities to boast about their other game achievements or to share their creative expressions with other players of the game, a feature that was very common to Facebook games. Some players might even prefer to chat asynchronously, by sending emails or other types of messages rather than engaging in real-time chats that they may find to be distracting.

As I’m typing this, my very social new dog, who preferred to sleep by my feet as I work, has now felt comfortable enough to try out a bed that we put out for him on the other side of the room. Just as dogs can learn new behaviors, so can people, so think about putting in a variety of loner and social opportunities in your game for players who have lived in your game long enough to move outside of their initial comfort zone.

Next Monday, August 21, a total solar eclipse will be visible across the continental U.S. for the first time since 1918. It is predicted to be one of the busiest travel days of 2017 as millions of people flock to the fourteen states across the United States in the path of the total solar eclipse to witness this magnificent spectacle. Many school districts have even purchased thousands of eclipse glasses so that students can observe this rare astronomical event without causing damage to their eyes.

It is fascinating to see how excited people are by this alignment of the sun, moon and Earth, which produces a shadow that moves across our planet. For some people, experiencing that gradual turn into total darkness is often uncomfortable, bringing out our childhood fears that bad things lurk in the dark. For some extremists, an eclipse is a sign of impending apocalypse, heralding the end of the world as we know it. However, for most of us, it is an epic spectacle that inspires more wonder than fear.

As a game designer, I certainly would like for epic events in my games to feel as epic as a total eclipse to the player.  What qualifies as an epic event?  It is significant event resulting in a change in the game state or story and which, once started, cannot be affected by the player’s actions.  Such an epic event might be part of the game’s environment and beyond the player’s control, such as the celestial mechanics that result in a total eclipse.  However, others might be irreversible actions initiated by players, such as the pressing of a button that detonates a nuclear bomb.

Such epic events can be foretold to players before they occur indirectly through clues or directly through narrative.  Depending on the tone of the communication, it can inspire wondrous anticipation or fearful tension in players, particularly if the potential consequences of the event are carefully unveiled over time to the player.  Knowledge of the event can take on even more important for players if it somehow provides strategic information to them, particularly if player have the ability to initiate the epic event.

Epics events in your game do not always need to be announced or hinted at before they occur. In the ancient past, people organized their lives by the order of the world around them, half of which was the sky. When surprising events like an eclipse occurred, they were an intrusion of chaos into that order and induced fear in the populace.  To cope with such an event, many ancient cultures undertook ritualistic activity to try to control it.  As a game designer, you can introduce surprise epic events to shake up your players and perhaps get them to try new play strategies in the game in an attempt to gain more control of their chances of success.

For the player to see epic events as fair, they must either have no impact on the player’s success in the game or the impact must be predictable (or consistent with the rules of the game world, at least). With an eclipse, for example, most players would find it sensible that the resulting darkness might have consequences associated with such darkness, such as shutting down all machinery powered by solar cells within the game. If, however, an oncoming eclipse might have some unpredictable effect, such as causing the stones in castles to melt, and it sets players back in their progress, they might see such an epic event as unfair.

The game designer must be careful that any epic events does not make players feel that their freedom of choice or chances of success in the game are diminished, but rather sets the stage for an exciting adventure. They should not be the end of the world as we know it (unless they truly come at the end of the game), but support the player’s feeling that such epic events can allow the player opportunities to do something epic themselves.