How Star Wars Influenced My Career 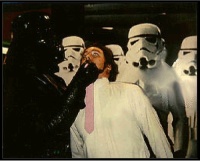 I first became aware of Star Wars in a December 1976 article in The Los Angeles Time’s entertainment section about the filming of the movie.  The article described a scene involving a farmboy (Mark Hamill) and a smuggler (Harrison Ford) disguised as “drones” as they infiltrated a space station to rescue a princess.  As I read the article, I thought to myself, “I’ll probably enjoy this film, but no one else will.”

Of course, five months later, Star Wars opened at the Chinese Theater in Hollywood and became a permanent fixture in popular culture due to its appealing characters, classic “hero’s journey” storyline, imaginative production design, immersive universe, exciting action set pieces, and groundbreaking special effects.  Back then, movie marketing wasn’t the well-oiled machine that it is now, and there certainly wasn’t any movie merchandising at the time. The film won audiences over because there hadn’t ever before been a film that brought pure fun to a broad audience.

Except that it didn’t won me over — at least, not at first.  Now, don’t get me wrong: I very much enjoyed Star Wars when it came out.  But Close Encounters of the Third Kind came out around the same time, and that film had a greater initial impact on me.  I thought that special effects that looked good in an Earth setting were more impressive than ones that took place in a fantasy space environment, and that the wonderment of man’s first meeting with alien life carried more emotional weight than the swashbuckling adventures of Luke, Han and Leia.

At first. However, as the years passed, Close Encounters began to lose its luster for me, whereas Star Wars gained more importance as a cultural touchstone.  The film had such broad appeal that it resonated with just about everyone’s inner child, and this was especially so with those of us in the game development community.  Game developers of the period all seemed to share a common pop cultural interest in Star Trek, Lord of the Rings, and Monty Python, but Star Wars was perhaps our strongest mutual fan interest.

That should come as no surprise, since the movie has been described by many film critics as a cinematic video game.  Remember the scene where the Millennium Falcon is escaping from the Death Star after rescuing Princess Leia, and the Han and Luke strap themselves in to gyrating gunner seats to shoot at the pursuing TIE fighers?  The displays are look like something right out of a video game of that era.  There was something so satisfying and right about those displays, that J.J. Abrams used identical graphics for the Millennium Falcon combat scenes in The Force Awakens.

Later on in the film, the entire Death Star trench run sequence was like a level straight out of game from the Golden Era of Arcades.  It had all the structural elements of a video game:

Curiously enough, there were not that many Star Wars video games that came out during the period that the original trilogy was released.  The only one that I recall was a Star Wars game for the Apple II in which players maneuvered crosshairs over a TIE fighter to shoot it down.

George Lucas did have an interest in video games himself, and indeed started his own video game publishing company, LucasArts, in 1982.  But also curiously enough, Lucas forbade his game company from making any Star Wars games.  He wanted his various companies, including Skywalker Sound and Industrial Light and Magic to earn success on their own without the benefit of an association with Star Wars.  And so LucasArts first two games were Rescue on Fractalus, a lunar landing game using fractal graphics, and Ballbalazer, which was soccer played with hovercraft.

Eventually Lucas relented and allowed LucasArts to make Star Wars-themed games like Star Wars: TIE Fighter, a true flight simulator, putting the emphasis on rewarding complexity instead of arcade action, and Star Wars: Republic Commando, that followed a squad of clone troopers into a side of the Star Wars universe we hadn’t seen before.  However, it was when LucasArts worked with other developers like BioWare and Pandemic Studios that produced some of the greatest Star Wars games like Knights of the Old Republic and Battlefront.

Of course, this article is supposed to be about how Star Wars influenced me as a game developer.  I’ve never had an opportunity to make a Star Wars game (although I came close once or twice), but the films did influence me in one particular way.  It has to do with a line that Princess Leia says in her hologram message: “General Kenobi, years ago you served my father in the Clone Wars.”  Now, the original film never explained just what the Clone Wars were, but that little throwaway comment — and other details like that throughout the films — suggested an immense universe to explore and many stories to be told.

And so, when I’m designing a game, I try to imagine a world that’s larger than the world I actually need for my game, and then add those details into the game’s story and environment.  Star Wars taught me that if you create an experience that goes beyond doing the minimum necessary to entertain people for the length of the experience, it might be something they are eager to return to again and again.

Posted on December 21, 2015, in My Career and tagged influences. Bookmark the permalink. Leave a comment.